In 1998 a book came out that detailed the birth of the first English dictionary which began in 1857.  No joke, there was nothing quite like a “proper English dictionary” before that time. It would take me nearly two decades to discover this book. The book is called The Professor and the Madman: A Tale of Murder, Insanity, and the Oxford English Dictionary by Simon Winchester.  If the title alone did not whet your appetite, then possibly nothing will.  This was yet another lucky book fair find, and I could simply not resist this one.  It is the true story of the making of the famous OED (The Oxford English Dictionary) and of the famous or even infamous men who made it happen.  It is an absolutely awe inspiring story of the dictionary that almost did not happen, the dictionary that men died making never to see completed.   Our main characters are Dr. James Murray, editor of the OED, and Dr. W. C. Minor, main contributor of thousands of entries for the dictionary and permanent inmate at the asylum for the criminally insane. 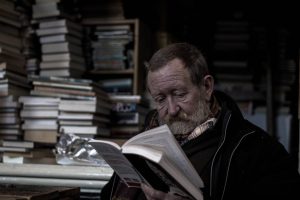 There are many aspects about this book that I loved.  There are actual dictionary entries reproduced at the beginning of every chapter, almost setting the theme for the chapters themselves.  Chapter 1, for example, begins with the very lengthy listing for “murder”, with all the etymology and changes for the word over the years.  By seeing these entries, the reader gets a sense of the immense project it was to put together a dictionary of such scope.  It was a monumental task.  Even those taking on this task underestimated how long it would take, which in total took about 70 years. I also very much appreciated the author’s language, which is very elegant and sophisticated.  For “word nerds”,  myself included, it can be refreshing to read something so eloquently written, with such academic vocabulary, rich in meaning.

The book retraces the history of both men from childhood and how they found themselves in their individual situations, and to a degree, what made them the men they became, especially in the case of Dr. Minor.  It leads us to the moment when Dr. Minor finds a flier with a call for contributors for the dictionary.  Finding himself with a lot of time on his hands and an extensive library in his cell, he could work and occupy his time and his mind.  It could possibly have proven to be therapeutic in the end.

Overall the story of these two men, and the incredibly ambitious project they undertook was fascinating, to the point that I even found myself reading little bits to friends who were willing to humor my enthusiasm for this book.  To imagine that this was done mostly by mail, submissions on little slips of paper, handset typeface, and compiled manually, in the mid 19th century makes my head explode.  To think that in Shakespeare’s day there was no English dictionary, to think of having no way to check the meaning or spelling of a particularly strange or unusual or new word, is difficult to imagine.  We take it for granted.

So as you may imagine, I devoured this one not only as a bibliophile, but also a word nerd and lover of historical fiction and etymology.   It is meticulously researched and eloquently retold. Undoubtedly a must read for anyone looking to improve vocabulary (whether English is your native language or not!) and especially for someone who underestimates the importance of and need for a dictionary.

3 thoughts on “The Story of the Oxford English Dictionary”