It is well known that the best way to learn a language is to move overseas and work or study in the country where that language is spoken. To be around a language every day and all day is the best way to learn a language quickly and with possibly much less effort than if you were not there. However, that option is not feasible for most people.  Whether it is an issue of money, time, any other number of possible issues, most people will learn a foreign language at school, with very few opportunities to be around native speakers of that language.  That can pose many problems for people, slowing down the process and making it difficult to stick to it, as well as making fluency very difficult to achieve.  Like most people, I learned French in school, only starting from high school, which is relatively late.  However, I did manage to achieve fluency with a lot of effort, a lot of dedication and many trips abroad.  If you are not studying a language in the country where it is widely spoken, there are ways to create a kind of immersion environment at your home.  To do this though, you will need to really commit to it. Follow these tips and ideas daily or weekly to make the most of your regular practice, as if you were living overseas!

Change the language on your devices (iphone, computer) to the language you are studying.  You will not believe all the words you will learn in doing this.  The translation of things we use daily will surprise you.  How is the expression “unlock screen” or “settings” translated into the language you are studying?  It might surprise you. It also might surprise you how quickly you get used to this.  I handed my ipod to a friend to use, and she was so confused by what she was looking at. I had totally forgotten this and had to find for her the thing she was looking for. 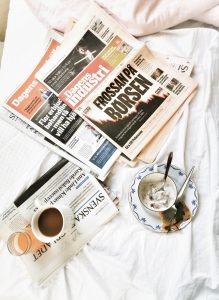 Subscribe to newspapers or magazines for home delivery.   It is a wonderful thing to receive newspapers in the language you are studying delivered to your door.  It sometimes makes me feel like I am traveling abroad.  I prefer the printed press to digital media.  It’s easy to carry to a cafe, to read on a bus, train or plane, and it never needs batteries.  Its very presence is a reminder to read it, whereas a newsletter or subscription that arrives in your email box is too easily lost in a deluge of other daily messages and quickly forgotten.  Having an international newspaper is a way to stay informed of the culture and events of the country and at the same time learn new words in the language you are studying.  Languages are always changing and this is one way of staying up to date with new terms and expressions.  It is also really nice to share these newspapers once I am done with them. I receive a newspaper weekly from France. Once I have read it, I usually pass it on to friends and other francophiles who get the chance to enjoy a newspaper in French from time to time.

Live stream news on your computer or subscribe to a cable channel in your target language.  There are now so many opportunities to get television programs or news in different languages, especially French, Spanish or even Arabic.  I love France24 because I can live stream the news 24-hours a day on the internet website or even via the app.  This same channel also has an Arabic version.  You can just steam it during the day when you are not working and let yourself get used to hearing the language as if you were living in the country.

There is also, of course, TV5 for French and many Spanish language channels on cable TV.  It can be a good opportunity to see programs or news in the language you are studying.  Additionally there are many TV shows and movies in foreign languages on programs such as Netflix, Hulu or Amazon.  Just ten years ago, this was not possible, and it used to be very difficult to rent movies in a foreign language.  Now these kinds of programs are widely available.  I don’t recommend using translated subtitles, as they are usually paraphrased, and quite often not what the people actually said word for word.  I do recommend trying it with the subtitles turned off or set the subtitles to the original language of the movie. Just remember that the subtitles and what they actually say may not correspond exactly. This has actually confused me from time to time.   Watching movies or television programs in the language you are studying (with or without subtitles) will give you extra practice in the language.  There is one word of caution: this is extremely difficult.  If you get frustrated, maybe it is too soon for you to be trying this. It has taken me a very long time to be able to watch movies or television in French.  Some programs use more slang and popular expressions than others.  You should be aware that comedies will use slang more than dramas and that maybe you need to start with documentaries or news before moving on to comedies. 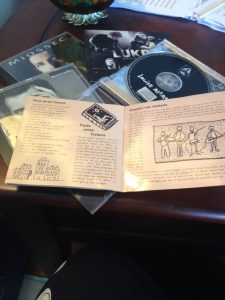 Listen to music, radio, podcasts or CDs in the language you are studying. To really expand on your total immersion atmosphere, search for CDs of music in the language you are studying.  If you do not have a CD player, there are programs that have a lot of international music like Pandora, or satellite radio.  I prefer CDs because I can listen to the songs over and over again, learn the words and practice singing along as quickly and fluently as the singer. They may also come with a booklet of lyrics, so it helps to understand and learn the lyrics.  I found that singing along with songs I loved really helped with my ability to speak.  It seemed to help with pronunciation, speaking more quickly, intonation, even sounding more natural.  Remember that just like talking on the phone, radio has no visual clues, so this is going to be a challenge.  Having it on in the background is nice because it will get you used to hearing the language without the pressure of trying to understand.  You may pick up on a thing or two here and there, but eventually get more and more as you do it.  The idea here is just to create that immersion situation, build up your ability and train your ear. 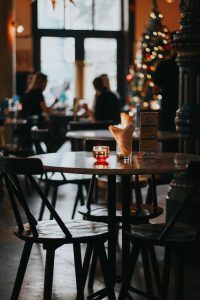 Participate in social groups that share your interest in language. There are groups like Meetup.com and others which gather from time to time just to practice the language and participate in activities related to it.  I had a fun Meetup group in Houston that met at least once a month to dine in a French restaurant and talk in French.  There were quite a number of expats too, so it was really fun for me, since I was no longer a beginner.  The host made sure to seat people according to their language level and ease of speaking, and we all got the chance to practice the language with people who could help. You can search groups meeting in your area, say to speak French, English, Spanish, Arabic, and can limit the travel area to as large or small as you would like. You will very likely find a group, sometimes one that even meets weekly or several that meet on different days of the week, ones that meet for coffee, drinks, dinner, or just to sit in a park and chat. If one does not exist yet, consider starting one. It will probably surprise you the interest people have in things like that.

Look for local cultural organizations that have regular events.  Even some culture and language schools have events that they host, inviting students and expats to participate in meetings, presentations, celebrations, holidays and festivals.  You can become a member and then receive notices that announce events in which you can participate. Here we have Deutsches House for German students, which also hosts events; Alliance Francaise and Union Francaise both for French events, and there are probably other cultural centers for Spanish or Chinese that I don’t even know about.  The more often you do these events, the more frequent the chances you have of practicing your language, meeting people in your community who also speak that language and learning more about the culture.

These are just some of the ways in which I have created immersion at home here. I am lucky that I live in a French city, where so much French culture already exists. My partner is French, and even though we use English at home, I also get to communicate with his family in French at least weekly.  I use French in some way every day, and I think that has helped me enormously.  I recommend that you try some of these tips, and if you think of others, please post them below in the comments.  The key is daily use, even if you do not have the opportunity to live overseas. Especially if that is the case, then you need to replicate that experience as much as possible where you are.

One thought on “Create An Immersion Environment, Wherever You Are…”